Neither law nor church preventing abortions on Guam

Bez tries to get around this contradiction by blaming the Catholic Church, the usual straw man. But unless you want to count the four or five people who stand out in front of a particular clinic in Tamuning once a week with signs and rosaries, the Catholic Church is wholly absent from this matter.

By Esperansa Project at February 27, 2021 No comments:

Women's Affairs: No link between Adelup, ACLU on abortion lawsuit

Bureau of Women's Affairs Director Jayne Flores on Wednesday said there is no connection between Adelup and the American Civil Liberties Union's filing of a lawsuit seeking to restore access to legal and safe abortions on Guam.

The nonprofit group the Vigilance Committee Inc. raised the allegation of a link between Adelup and ACLU, when the group did not receive a response to its Sunshine Reform Act request from Adelup about the abortion lawsuit.

It turns out, the request for information got stuck in the spam folders of the intended GovGuam officials. CONTINUED

For Esperansa's further reporting on this story, go here.

By Esperansa Project at February 23, 2021 No comments:

JAYNE FLORES: "THERE IS HOPE" 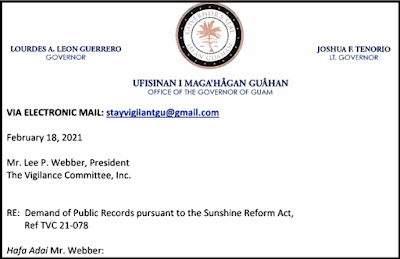 I would describe the atmosphere on our island, with its 165,000 population that is a majority Catholic, as initially hostile toward this issue. However, over half of the voting public cast ballots in favor of our first female governor…Lourdes Leon Guerrero, in November 2018 despite her openly pro-choice stance. So there is hope.

Hope for what? Hope for Planned Parenthood, the nation's largest abortion provider, to open up a clinic on Guam. In the same email, Flores writes:

If PP wanted to open a clinic here, is that we do have a medical clinic that recently closed. Would there be a possibility that PP would be interested in leasing this space to set up its own clinic?

Flores' email to Nucatola was copied to Bliss Kaneshiro, a party to the ACLU lawsuit, Deighton Kavarne, another employee of Planned Parenthood, Anita Arriola, a well-known Guam attorney who has been at the forefront of advancing abortion on Guam for many years, and Dr. Ellen Bez, a local Ob/Gyn who, pursuant to her letter to the editor a few days ago is pro-abortion advocate.

By Esperansa Project at February 23, 2021 No comments:

In a previous post, we presented a brief response to a letter by Dr. Ellen Bez in the Guam Daily Post titled "Guam laws impose unreasonable barriers to a women’s choice."

In this post, we will continue to address Dr. Bez' claims as follows:

In her letter, Bez alleges: "This is an emotionally charged issue, and there are strong convictions on both sides."

This a usual tactic.

Bez and her ilk resort to this argument at the outset in order to evade answering the question whether or not the "abort-ee" is a human being, which, is really to evade the question:

"When are you okay with killing an innocent, defenseless human being?"

In an age, particularly recently, where the mantra "follow the science" is almost an imputed impeachable constitutional article, the real "follow the science," for absolutely everyone, but especially for medical personnel like Bez, demonstrates that from the moment of conception, there is "something" growing.

In fact, given the "science," pro-aborts" don't even bother with the "clump of cells" argument anymore but have resorted to the "woman's right to choose," argument.

But "right to choose" what?

Per the pro-aborts, like Bez, the question is whether or not another "someone," regardless that the "another someone" happens to be living and growing in another host human being, can be killed by the "choice" of that "another someone's" host...with the assistance of the host's doctor...like Bez.

Comically, if it can even be called "comical", the pro-aborts "sacramental" authority, i.e. Roe v Wade, employs the phrase "woman's right to choose," absolutely NOWHERE.

Pursuant to Roe, all authority to terminate a living child in the womb is given completely to the attendant physician in the first trimester, and, amazingly, to the state in the final two trimesters.

The WOMAN has NO choice!

Given that in 1973 when Roe became the law of the land, and wherein not only was the Roe Court all men - as were most physicians, - Roe was a decision BY men and FOR men.

And why was that?

The fact is that the original "Jane Roe" not only was not raped as her then pro-abort attorney had claimed, but "Roe" (i.e. Norma McCorvey) went on to not only birth her child but in later life became an virulent opponent of the ruling that was named after her and has led, since 1973 to nearly a hundred million murdered children.

Ultimately - for anyone who cares about the facts - abortion is the ultimate "cover up" for men who don't want their tracks of infidelity, prostitution, and general "20 seconds of pleasure" traced back to them.

I.E, abortion is the "final solution" -  the ultimate "birth control" - wherein men can "kill the evidence." And so they do.

And Bez, pursuant to her letter, appears to be a willing conspirator.

By Esperansa Project at February 19, 2021 No comments:

Letter: Maybe Guam doctors want to save lives, not destroy them

In a recent letter to the editor, Miah Jesus remarked that two doctors from Hawaii “have provided abortion care to some women from Guam since we have not had a doctor willing to provide safe abortion care since 2018.”

Why is that? CONTINUED

By Esperansa Project at February 19, 2021 No comments:

Email ThisBlogThis!Share to TwitterShare to FacebookShare to Pinterest
Labels: Abortion on Guam, In the Media

DR. BEZ EXPOSES WHO IS REALLY BEHIND THE ACLU LAWSUIT 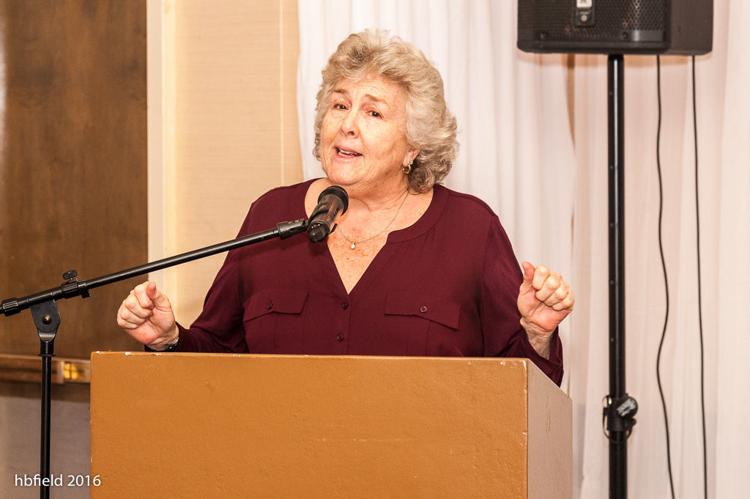 Responding to "Guam laws impose unreasonable barriers to a women’s choice" by Dr. Ellen Bez, there would have been no need for Dr. Bez' letter and no need for a lawsuit from the ACLU if Dr. Bez would just provide the abortions she insists women have a right to.

As Dr. Bez is a local doctor, it is Dr. Bez who is denying women their "right to choose" by not providing abortion right here on the island she says has been her home for three decades. Why do we need to "telemedicine" abortion in from doctors in Hawaii when we have Dr. Bez right here at home?

If medication abortions are as safe and wonderful as Dr. Bez says they are then why doesn't Dr. Bez simply prescribe the medication herself?

It appears that Dr. Bez has exposed who is really behind the ACLU lawsuit and it is not two doctors from Hawaii, nor is it the ACLU.

By Esperansa Project at February 18, 2021 No comments:

LOVE AND THANKS FOR DR. TOM SHIEH

On January 28, 2020, just as news of the ACLU law suit was breaking, Dr. Tom Shieh posted the following: 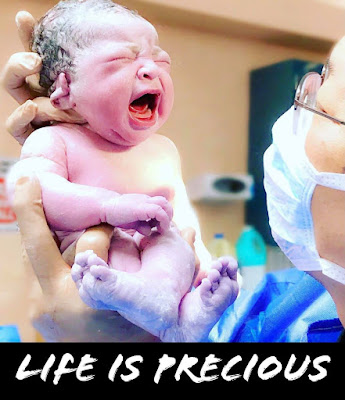 Jatnuaruny S2S8n agfcpt t7dr:ofgnais3oi0lo PdmgrcloMed  ·
By the way, if you know someone who is pregnant and is considering abortion vs adoption. Please have them contact me, we will provide their prenatal care and delivery, no charge. We have patients who cannot get pregnant and would love to adopt. Thank you for your consideration.

On February 17, several people gathered in front of Dr. Shieh's clinic to thank him. 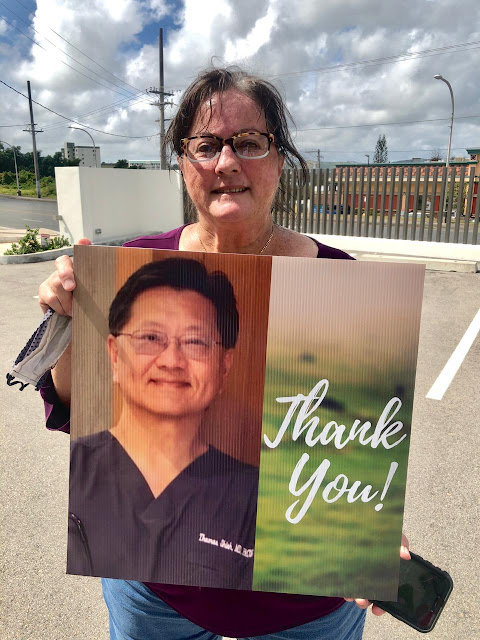 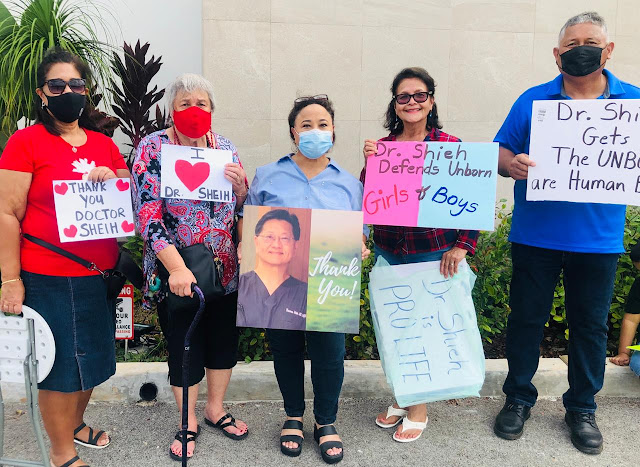 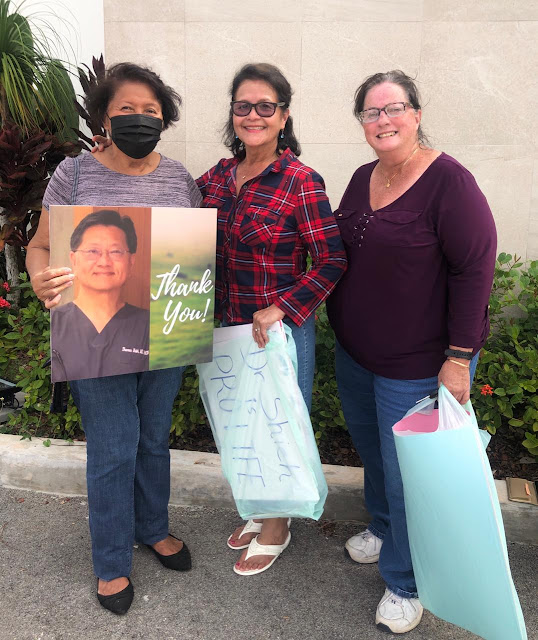 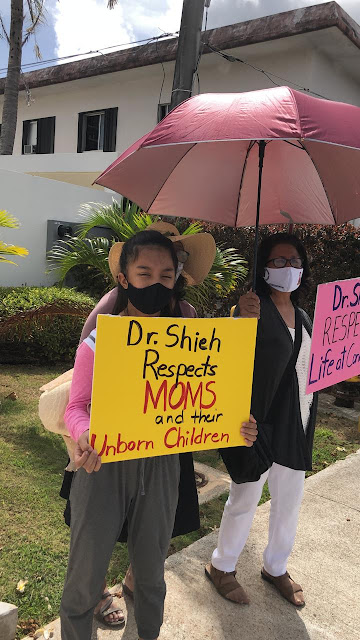 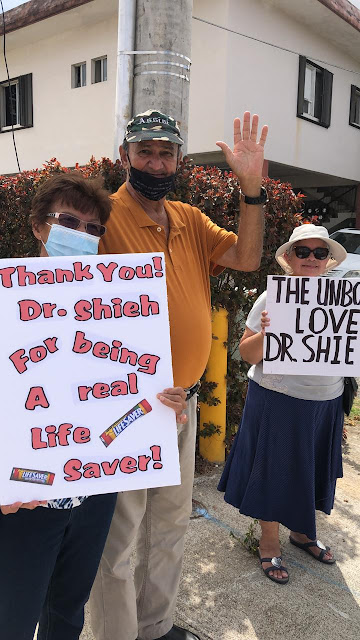 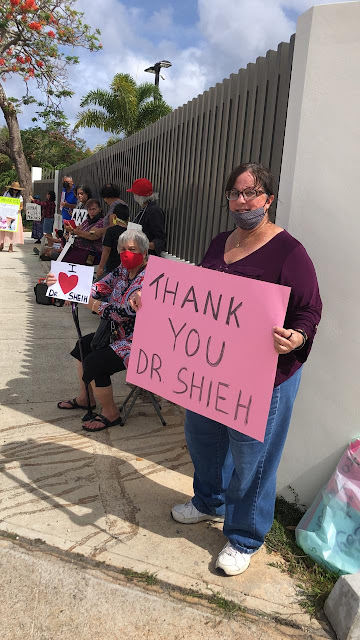 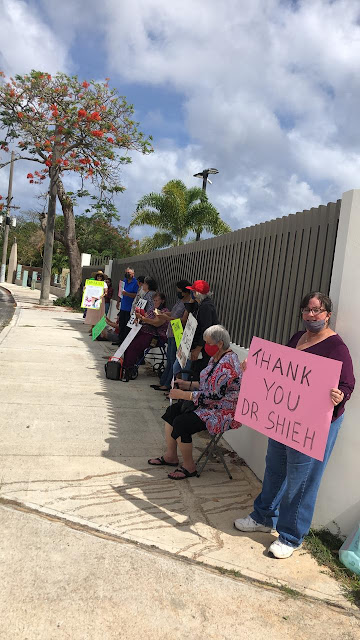 By Esperansa Project at February 18, 2021 No comments: 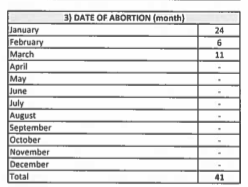 Women identifying their ethnicity as Chamorro accounted for 44% of procured abortions in 2018. 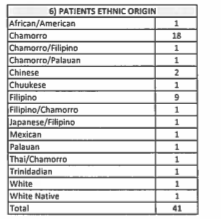 Women with at least some college accounted for 78% of the abortions in 2018.

25% of the women who procured abortion identified themselves as married.

Most of the abortions were performed by suction curettage: 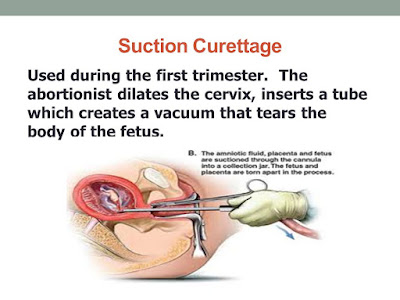 Nearly 80% of the babies aborted may have experienced pain as their bodies were ripped apart:

All of the abortions were performed at the Women's Clinic (Dr. Freeman's Clinic), the Guam Polyclinic had already closed its doors before 2018. 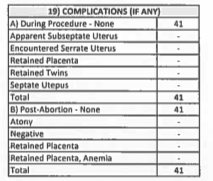 Why then was the patient taken to GMH? Either something went wrong or GMH is permitting abortions.
The GMH "abortion" demonstrates the problem with telemedicine medical abortions which is what two Hawaii doctors are suing for. But while the doctors may prescribe abortion pills over the internet, they won't be here when something goes wrong. And which Guam doctor is going to be called in to finish the job?
See the full abortions reports here.
By Esperansa Project at February 17, 2021 No comments:

LETTER TO THE EDITOR FROM SHARON O'MALLAN

On Feb. 2, you wrote a letter addressed to the women of Guam stating your reasons why telemedicine abortion, (the killing of an innocent defenseless human being), needs to come to Guam.

On Feb. 12, you wrote a letter scolding Sen. Jose Terlaje for the senseless blood sport of killing roosters. (CONTINUED)

By Esperansa Project at February 17, 2021 No comments: